Relationship of George Colburn and Dwight D. Eisenhower
Has Endured More Than 25 Years

In the summer of 1988, documentary filmmaker George Colburn agreed reluctantly to take a meeting in Washington, D.C. with three former aides of President Dwight D. Eisenhower to discuss the legacy of our nation’s 34th president.  In just over two years, it would be time to celebrate that legacy during Eisenhower’s Centenary.

Colburn slightly knew only one of the three men, Abbott Washburn, an FCC Commissioner, who was a friend of a friend in New York City where Colburn’s business was located.  What Colburn thought was going to be a courtesy call for a pal ended up being a life and career changing day.

In May 2013, American Public Television (APT) premiered Colburn’s 8th documentary on “Ike” when “Eisenhower's Secret War” was distributed to public television stations across the country.  The shows have been produced by Starbright Media Corporation, Colburn’s Michigan-based production company..

The new documentary, revised for the 70th anniversary of D-Day in 2014, marks a 25-year partnership between Eisenhower and Colburn that all began with his unwanted meeting with the former aides. Next on Colburn’s Eisenhower agenda is a feature documentary version of Eisenhower’s Secret War that begins with the successful landings on D-Day that made “Ike” a household name in the United States. 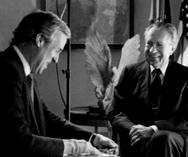 Dr. George A. Colburn interviews former President Richard M. Nixon in 1991 for the first program in The Eisenhower Legacy series.

"Like many others I had always thought of Eisenhower as an outstanding General of the Army in World War II who somehow got himself elected president a few years later and then didn’t do much of importance in the White House," Colburn recalled.

Colburn, who holds a Ph.D. in history from Michigan State University and taught American Studies there for four years while writing his dissertation, says President Eisenhower's remarkable presence over 20 years in major military and political positions on the world stage, never crossed his mind while pursuing his graduate studies in modern British political history at MSU in the 1960s.

"Growing up in the 1950s, I didn’t think much about who was doing what in the Oval Office, Colburn said, and then during my graduate studies, I accepted the consensus view that Ike was pretty much a “do nothing” or “caretaker” President.

His research after that meeting more than a quarter century ago with the three Eisenhower aides quickly convinced him that there was much more to Ike than the stereotypes that existed inside and outside academia.

Ike's aides convinced Colburn to dig for answers about the Eisenhower legacy. And they said he would surely be surprised.  He did.  And he was.  The next step was to find the financing for a documentary to present the Eisenhower legacy in the light of new research then coming out in articles and books. 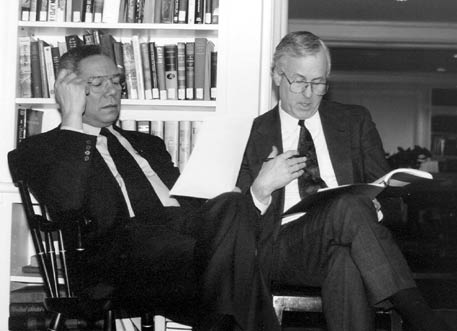 Producer George Colburn works with Colin Powell on the host's script for The Eisenhower Legacy series that premiered on the Disney Channel in 1998.

It took Colburn almost three years to get his first program on the air. Entitled "Dangerous Years," the documentary on President Eisenhower's foreign policy first aired on the Discovery Channel in the fall of 1991 – one year after the Centenary celebration had taken place.

Two years later, Colburn wrote and produced “Contentious Years,” a documentary on the President’s domestic policies, especially his strategies that would destroy Sen. Joe McCarthy political power, and convince the Congress to pass the first civil rights legislation since Reconstruction.

Colburn was then asked by the Disney company to produce a "V-E Day Plus 50 Years" documentary – a show focused on Ike's military leadership in World War II.  All three of these early documentaries were hosted by legendary NBC newsman John Chancellor, himself a witness to the history of the Eisenhower years.

Colburn then produced a four-part series on "Ike" for Disney covering the complete story of Eisenhower's public life from 1941 to 1961.  These programs first aired in late 1996 and were hosted by General Colin Powell (USA, Ret.).  The next year Colburn wrote and produced a 20-part classroom series about “The Eisenhower Era, 1941 – 1961,” also for the Disney company.

In 2002, on the 50th anniversary of Ike's first election as President, Colburn met several key officials of the grassroots independent organization that helped convince Ike that he should come home from Paris and his NATO command to run for President. These "Citizens for Eisenhower" officials helped convince Colburn that the story of the 1952 election had been largely ignored by the history books and was worthy of television treatment.  Over the next several years, Colburn worked up a script about the Eisenhower presidency that considered three questions: “why he ran,” how he won” and "why it mattered."

"Eisenhower's Secret War" answers these questions. In Part One, "The Lure of the Presidency,” Ike’s tortured decision-making prior to nomination is considered as well as his difficult campaign against Adlai Stevenson that was ultimately successful because of his campaign’s widespread use of television, a “first” in presidential politics.

Part Two, "Building Bombs, Talking Peace" focuses on “why it mattered” that Ike was in the Oval Office rather than a politician with scant knowledge of military strategy, rockets, nuclear weapons and the Pentagon budget.  By “covertly waging peace” throughout the post-war era Eisenhower managed to keep nuclear war from breaking out during the early Cold War years.

Since Colburn went into production during Centenary events in Abilene, KS, Gettysburg, PA and Moscow, USSR in October 1990, he has interviewed more than 130 “witnesses to history” including four former U.S. presidents, key administration staffers, former members of Congress, journalists, members of foreign governments and leading authors and scholars who have carried out breakthrough research about the Eisenhower legacy in recent years.

Colburn points out that Eisenhower "was supremely secure in himself.  He had no reason for self-promotion after his World War II exploits.  His war experience – and the weapons of modern war – prompted him to become totally committed to peace. Now, his 'hidden hand' tactics as President are well known.  In many instances these tactics were vital to Ike's success; the general public could not know exactly what he was thinking or willing to do," Colburn said. “We see this playing out in the second hour of our documentary."

"The Eisenhower Papers in Abilene have provided scholars in recent years with a clear view of Ike's strategies and the subsequent actions that helped implement the strategies. They clearly show Ike to be a man with a plan – a plan to keep the peace.  He was a totally confident Commander-in-Chief who made one critical decision after another in the interest of keeping the peace," Colburn states.

The latest scholarship on Eisenhower has resulted in most experts now ranking Eisenhower among the greatest presidents in U.S. history – a far cry from the rankings in 1988 when Colburn started his exploration of the Eisenhower legacy.

"These accolades are a long time coming, including from me," Colburn said.